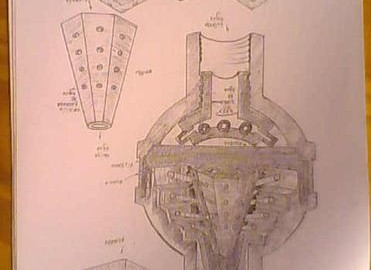 I love the idea of spell building systems, but not always the system itself. I absolutely love EABA v1.1 and the Universal Table. Going through the book of spell examples, I found myself building all kinds of magic items and spells. The whole time, I kept thinking that it was cool to be able to quantify just baout anything I could think of.

Then I found that I was beginning to create spells/items/whatever that didn't work. The system usually broke down because the effect was too novel to quantify. I should say that EABA could quantify it, but I felt like that I was shoehorning something that really didn't fit.

When Epic Magic came out for Pathfinder, I discovered Epic Magic for D20. I read them both excited about spell seeds as a building block for new spells. But then the same problem came up. A spell I couldn't really quantify. To make matters worse for me, I found that spells with the same effect made the "trappings" or "special effects" meaningless.

For example, there is a spell on an OSR blog that describes a one-time teleportation effect from one campfire to another campfire some distance away. (My google-fu is weak, I couldn't find it to link to it and give the author credit for coming up with a great spell. Sorry!) I found that using EABA, Epic Magic, or even Open D6 gave me a spell that was no different than a spell that simply teleported the magic-user a random distance away. I liked the idea of the campfire, but found it disappointing that there was really no reason to have the "cool" version because it was more limited than the "generic" version that worked everywhere. Sure, I could houserule the system, but that seemed to be quite daunting, to say the least.

This lead my two year long quest to come up with a spell building system that I actually like. Unfortunately, I kept coming back to the same two issues over and over. I could live with effect that couldn't be quantified well, but that whole business that favors generic spells over flavorful or colorful spells seemed to change the whole business from fun to math. I love math, but not the kind that gets into min/maxxing and optimization.

So, I think I'm on to something now that I have come up with reasons for a magic-user to research and/or cast the more flavorful spells. Using the emphases system that I mention a lot around here, a magic-user would choose a more flavorful spell because it would be faster, cheaper, easier and/or more effective than the generic version of the spell. For a different kind of spell caster, the emphases system would also make the colorful versions of spells more likely to suceed than the generic version.

More than that, if a magic-user has a series of seemingly odd emphases, it is to the spell caster's advantage to find a way to combine as many of these bonuses as possible. When a magic-user has emphases of cold, small round objects, blue, and four, he or she is more likely to cast a spell that begins with four small blue pearls of energy zooming to a target and exploding in a 30 x 30 x 10 cylinder for 1d6/level cold damage rather than a fireball spell. The effect is the same (except that one does cold damage and the other does fire damage), but with all those emphases incorporated into the spell, the magic-user either invented that spell for a song, made it up in record time, or finds it trivial to cast this spell compared to the traditional fireball spell.

Even better, I can put the 30 or so traditional tags associated with spells (like fire, ice, illusion, protection, summon, transform ,etc.) and combine them with 50 or so others I've come up with based on classifiers in other languages (like small round objects, rows, seeds, stalks, thread, charcoal, tubes, etc.) to make a random table. I roll up for or five random emphases and now there is an interesting spell for the players to find on an adventure.

I've posted a bit on my Google+ Page, but I plan to write up details here.