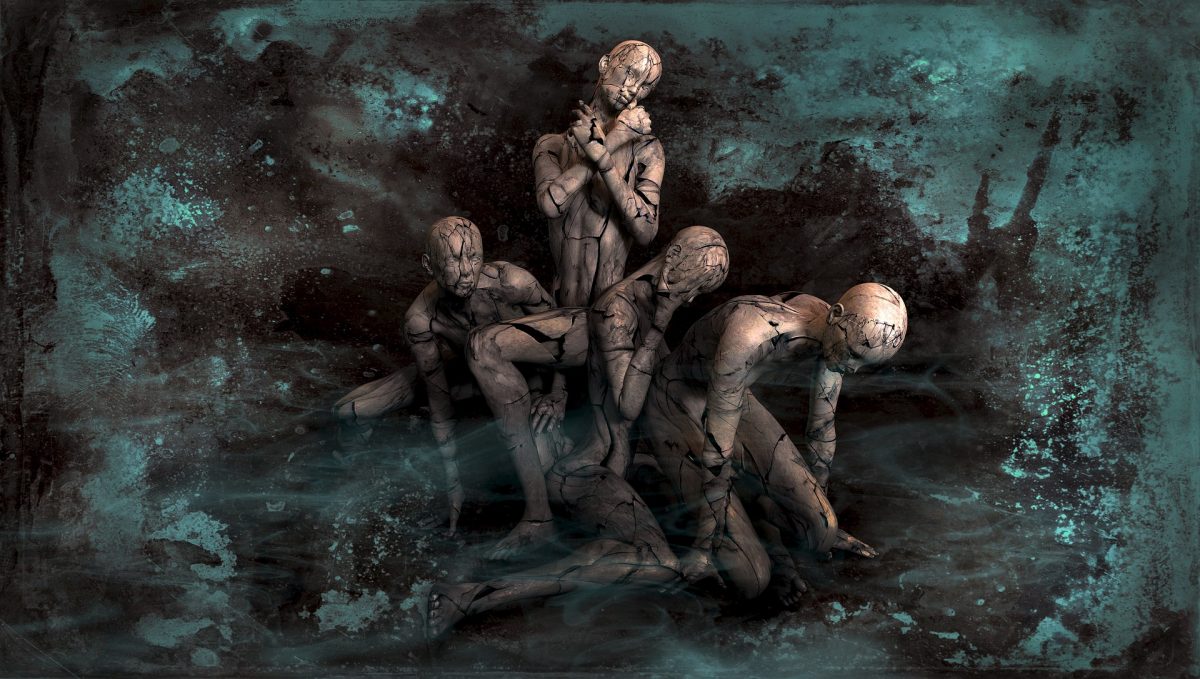 I posted about a verb-noun magic system on Twitter and this was the response.

When someone with an encyclopedic knowledge of Ars Magica asks about an idea and invites you to submit it, you need to write it down. This idea lives in a spreadsheet now, but will live here when I am finished with this post.

Magic in a Different Language

The main idea began as Ars Magica spells in a different language. If you're new to it, Ars Magica uses Latin for fifty types of spells, five verbs called Actions, and ten nouns called Forms. Combine an Action and a Form to generate a sentence that begins a spell for one of the types of spells.

One of the Actions is Creo or I create and one of the forms is Terram, a term that encompasses soil, stone, or minerals. If a Magi wishes to generate an earthen wall, they would cast a Creo Terram spell to do it.

My original idea was to use Ancient Greek, Sanskrit, or Amharic, but I realized that my disuse of Greek and my lack of knowledge of the other two languages would devolve any development of this idea into discussions of grammar and vocabulary. With some reluctance, I decided to use Vulgar to generate a language for me.

I purchased a license for Vulgar, so after setting some basic parameters, I had a dictionary of 4000 generated words. Since I only want a naming language, I didn't most of the grammar, but I had enough to make basic sentences. This led to translating the Actions and Forms directly providing me with the following:

I used a bit of the grammar that was generated producing a je- prefix to mark present tense. The word for I, as a doer of an action is translated to go. I translated the Forms, but the little bit of grammar allowed me to distinguish between a definite object and an indefinite one. In other words, between some earth (any earth will do) and that earth (this specific bit of earth right here). So my I create earth types of spells change from Creo Terram to Go je'awa niboje (I create some earth/soil/minerals) or Go je'awa wuboje (I create that specific earth/soil/minerals).

And Now for Something Completely Different

In some ways, it's enough to have Ars Magica in a different language than Latin. That said, I wanted something different that evokes a different sense. To prevent scope creep, I set three goals:

The first step was to make a slight change to the grammar to evoke a different feeling. Instead of I create, magic is plural, i.e. We create. Looking at my grammar, the 1st person plural is fi pronounced like the English word fee.

The next step was to change the grammar of a spell from We Create Earth to We Earth Create. In other words, to change the word order from Subject-Verb-Object to Subject-Object-Verb. Going back to my examples from earlier, I create some earth/soil/minerals becomes Fi niboje je'awa (We some-earth create).

The next idea provided an adverb to describe the means of casting a spell. I imagined that most spells would be cast by using magical energy, so the only real change in the spells would be adding a word that was used with most spells. Consulting my generated list of words, magic is dogu. A word for by means of or more simply 'with' is ni. This makes my We create some earth/soil/minerals by means of magical energy to Fi nidogu niboje je'awa (We by means of magical energy create some earth/soil/minerals). It sounds like a lot, but all this really does is make every spell begin with Fi ni-.

This begs the question, "What other means can be used to cast a spell?"

I thought about this in RPG terms, so I thought of name magic and magic that drains life points. This opens the door to different types of mages based on their source of magic. Looking through my vocabulary, I settled on ni'uso (by means of blood) and ni'saki (by means of a name). Putting this all together, I made the following spells:

You may have noticed that the truename spell changed back to I Control instead of We Control. This was done for flavor. I wanted to make truename magic rare, even a bit scary. In game, I decided that the spell caster is not working with the force of magic or with their life force for truename magic. The mage is on their own using forbidden knowledge.

I originally created this system for 5e and my homebrew OSR game. I'll include ideas for those two in a later post. The original tweet was in reference to Ars Magica, so I'll talk about that first. Before I start, though, it's important to note that I own the 4th edition book, follow The Ironbound Tome, and read wikis/forums. As such, my knowledge of Ars Magica is very incomplete.

In researching this post, I found that there are three official books that cover alternate magic in the world of Mythical Europe: Ancient Magic, Hedge Magic, and Rival Magic. In Ritual Magic, the Amazons have an alternate system for creating spells. Instead of Techniques and Forms, it uses Vowels and Consonants. Here is a sketch of a similar idea.

There are two Magi of Ex Miscellanea that practice the Commutative tradition of magic. They call themselves Jihine (jee-HEE-nay) and claim to have learned their tradition east of Persia along the Silk Road. Rumors have spread of their connection to Suleiman. Explanation of their tradition has been compared to Taoist talismans leading to conjectures of ties to Cathay or possibly the kingdom of Prester John. Aside from tales of encountering sahir, very little is known about their tradition in the Hermetic Order. Their charms, however, are prized by all Magi not only due to their unique magical properties, but their exquisite craftsmanship. Jihine openly share about their processes for making charms/talismans as well as their research.

Jihine outside of the Order of Hermes find a way to ingratiate themselves to whatever order is in power where they live. There are Jihine in every land and fae region, though never in large numbers. Their mindset tends towards research and scholarly pursuits. They produce many treatises and charms that comes from a desire to learn and to help others. Jihine share a common belief that magic is performed with the energies that fuel spells and charms seeing themselves as a catalyst more than a controller of magic. They are careful to write in the languages where they live, using their own language solely for casting spells.

Jihine magic begins on a Path, uses a Voice to direct magic using Icons that represent areas in all creation.

Jihine choose one of three paths to begin their magical training: ICE (EE-say), DOGU (DOH-goo), or SAKI (SAH-kee). ICE translates to Ink, DOGU to magic or viz, and SAKI translates to words or names. Jihine will eventually learn something about the other three paths. The Path of USO or blood, is known to all Jihine, even as apprentices. More on that later.

The Path of Ink is devoted to creating charms and treatises. Their charms are long thin scroll written in an unknown language that provide protection and luck. The Treatises focus on topic of their local order and rarely about their own practices.

The Path of Magic is devoted to using magical energy to cast and research spells. Most Jihine start here to aid them in their career as a Magi. Like Magi is other orders, this path uses Viz to fuel spells and magical items.

The Path of Words or Names is rare, even for seasoned Jihine. It departs of the core belief that spells and charms invite the cooperation of magical energies. The Path of Names changes focus from the energy to the Magi themself and allows control of objects, creatures, or beings. This path is believed by some to be connected to Cain and the use of the language of Adam, though Jihine insist that is not true.

The Path of Blood is a magic of last resort. The Magi offers their own soul to fuel a spell. It allows for powerful magics, but cost great injury to the Magi, an often death. Jihine use this path only when someone is in immediate and grave danger.

Icons represent elements of creation. They are used in Jihine to determine the type of magical effect. They are:

Jihine forces direct energy to generate magical effects. The source of the energy is determined by the path the Magi is using. The voices are:

There's more to do, like generating spells as well as better defining new/forbidden Virtues and Flaws. Their one trait that I enjoy is that Jihine do not tend to keep secrets, instead choosing to find connections in all things.That said, the Jihine are not meant to be the unknowable exotic tradition. Lacking a definitive and history allows you to fill in the blanks. You could place them amongst the Scottish Druids, emphasizing the tree icon, consider them disapora from Persia, or tie them to Cathay per Issue #11 of Hermes Portal. The goal was to leave them open ended enough to customize. I originally wanted to place them in the Khazar region, but it didn't feel like a good fit. Let me know if you want to me create a homeland for them and I'll make a PDF with that kind of detail.

To better explain the Path of Blood, the most common spell is an emergency flight back to home base (or as far away as possible). This spell is named A Desperate Exit from Harm. When I create the spell list, this would be categorized as Aju Dibe (Push Dragon Energy). In the language of the Jihine, it is Fini Uso Wu'aju Jedibe Notepa (We-By Means of Blood-Dragon Energy-Push-Home).

It took me over a year, but I finally got the barest of bones out on the blog.