My kids began playing D&D with my brother-in-law. Then he bought them the PHB and Volo's Guide for Christmas.

After one session, they were ready for another.

That was Thanksgiving and we were finally able to start on Session Zero over a snow-day induced extra extended weekend. I asked the usual questions about what they wanted. Here is a bullet point version of what I understood:

I thought about an artifact as an object of their quest and turned to an old friend for inspiration. Looking through the 1e DMG, I found the Rod of Seven Parts.

Most recently, the kids have asked to include their mother, so we are going to roll up her character soon.

This has generated the world that I call the Staff of the eXo. More to come.

I would normally post this in my RPG Ideas and Projects collection on Google Plus. Since the announcement of its impending demise, I ported over all the posts from that collection to my site here. I have edited all the 2018 posts to that collection for proper titles, categories, and tagging.

I have to get used to posting here instead of there, so my apologies for the long introduction. I have to stop saying that my next post will be about x and y now that I will post random tidbits here more frequently.

Dotsies is an interesting font based on the premise that handwriting makes letters much larger than they need to be. The result is something you might imagine an AI would invent. What makes it interesting for me is that everything can be typed with one hand.

When I think about the Rune Magic system in my Samoora campaign, this fits with the image of a person manipulating an object on their arm with their free hand. Even better, words typed in this font look like pixelated runes. This makes the keyword nature of the magic system tie into the rune concept. Woot!

Even better, you can design your own version of Dotsies. So, I have designed my own version and I will change the font to match with FontForge.

So I have a font that I can read, but the players cannot. I can glance down at the character's collected runes and know what spells they should be able to generate.

As John Smith used to say, I love it when a plan comes together. 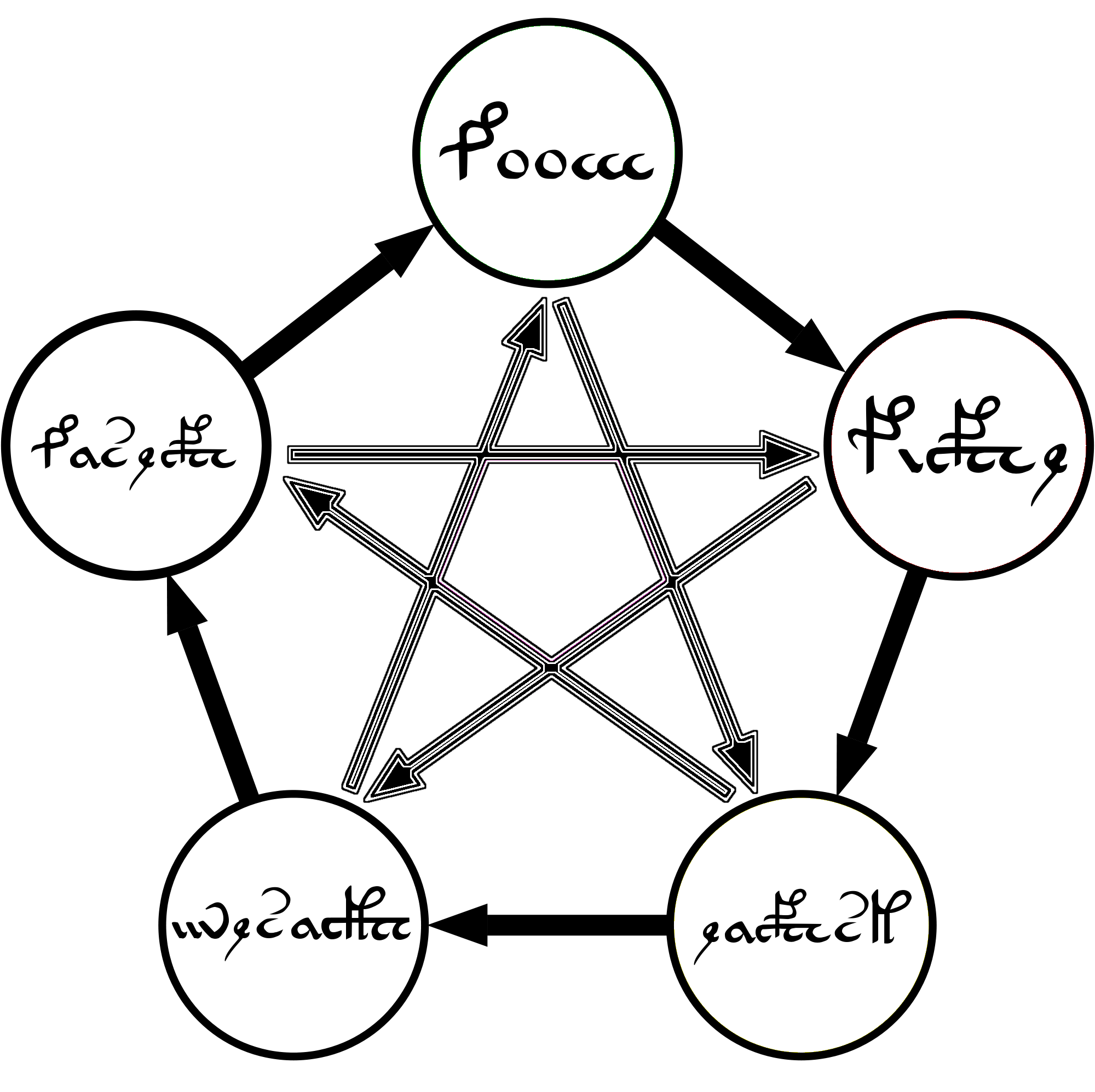 I was skipping around YouTube through various constructed language videos when I found a video about hard magic systems. For those that may not know (like I didn't until I saw the video), classification of magic systems as hard and soft comes from Brandon Sanderson. Hard magic systems tend to have well-defined rules and logical consequences. The video uses alchemy from Full Metal Alchemist to make this point.

The main points of the video state that a hard magic system has four properties in varying degrees:

In some ways, these properties can make a magic system look more like a science in that if I follow the rules, I will get the magic effect I want every time. However, if a magician follows the rules without understanding limitations or cost, the door opens for an unpredictable effect.

I bring this up because I think it is an interesting way to describe the various magic systems in my Samoora Sea setting. Magic is not universal as it is in D&D. Every region has a form of magic, each with its own rules. Part of the idea behind the setting is that characters, through exploration and promotion of inter-region trade, blaze their own path to practicing magic, taking pieces that they learn along the way. A magic-using character will begin in one tradition but learn one or more different tidbits along the way.

In this series, I will talk about the four properties of the following magic systems in Samoora with the primary region in parentheses:

The last three are easier to describe as they are more akin to traditional divine magic in D&D. The others vary widely in their connections to traditional D&D style magic.

Before starting with Rune Magic, Let me define magic in Swords & Wizardry (rules as written) using the four properties of a hard magic system. The Samoora Sea setting will be written for S&W making the standard system a good place to start.

As written in Swords & Wizardry, arcane spells are memorized formulae, gestures, and incantations meticulously recorded in books of magic. This means the first limitation is that spells must be written. All spells come from some wizard writing it down. The second is that spells must be memorized.  It's not that new spells can't be crafted, but that crafting one requires research, experimentation, and a meticulously written recipe.

Furthermore, it is written that a Magic-User can only hold a certain quantity of magical power in mental, memorized reserve to be released later in the form of a spell. In the game, the finite number of spells that can be memorized are measured in spell slots.

Beyond spells are other ways of using magic, such as creating a golem. Like a spell, though, creating a specific type of golem is still a documented process. Although creating a golem requires no memorization, it still requires some rare book or be the product of a magic-user's research.

For the sake of space, I won't go too much into creating various magic items like potions, magic swords, and rings except to say that those items traditionally require research, though rules-as-written say that the creation of such items is up to the referee. One thing that is stated, however, is that there are marvelous magic devices that have no written instructions. Those marvelous devices though are described as lost arts that a magic-user may never be able to reproduce.

Scrolls also have a small set of limitations described like this: with the exception of Protection scrolls, which can be used by any character class, scrolls can only be used by a character class that can cast the appropriate type of spell. Rangers and Thieves are exceptions to this rule at higher levels.

In short, arcane spells are meticulously written recipes. They must be memorized to be used and a wizard is limited in the number of spells he/she/they can memorize. The use of magic beyond spells is still limited to a written recipe. Magic swords, golems, potions, etc, require a set of instructions to be created. Scrolls have further limitations in their use; a scroll can only be used by spellcasters that could normally use the spell without the scroll. There are more limitations that could be listed, like armor usage and lack of healing magic, but these cover the major limitations of arcane magic in S&W.

Although Divine Magic is described differently, it basically works the same way. It is not as limited to a written recipe as a Cleric may be provided spells by visions and revelations from their primary force. The two smaller differences are that Cleric can wear armor while casting spells and the focus of divine spells are more centered around healing wounds, diseases, or mental conditions.

This one is short. Basically, any spell, arcane or divine, always works within the limitations listed above. A magic-user memorizes a spell, it will work as described when cast. A cleric meditates for spells, it will work when cast. There is no doubt that the formulae (arcane magic) or gift of a god (divine magic) will work.

The only unpredictability for a spell comes when a creature is immune or resistant to magic. The spell worked, but the only reason it did not work as expected is that the target shrugged it off. Characters resist through the use of a saving throw, creatures may have an immunity to certain types of magic or a limited chance of immunity to all magic.

It's difficult to find any real weaknesses in magic. If a character has access to it, it works. Using magic doesn't necessarily put the spellcaster at some kind of disadvantage. It's true that there is a limit to the number and power of spells used daily, but there is no problem with hitting that limit. It doesn't cost sanity, health, or even physical scars. Magic is like a battery: once it is out of power, it needs to be recharged. It stinks not to have magic around, but it's simply a matter of time until it can be used again.

Speaking of time, it is the biggest cost for using magic in S&W. There is a daily cost of time to 'reload' the spells for use. For a new magic recipe, there is a cost in time to research it, though the specifics are left up to the referee. It takes time to gain access to more powerful spells. Humans have more potential to use magic, but the lifespan of a human is limited. Interestingly enough, this cost has worked into the lore of D&D through the idea of liches. A lich finds a way to prolong their life to be able to continue to research magic. Still, the price for transforming into a lich is quite high, it exchanges the cost in time with the cost of isolation.

I'm over 1200 words, so I'll wrap up. I hope to give a similar treatment to all magic systems in my Samoora setting starting with Rune Magic.