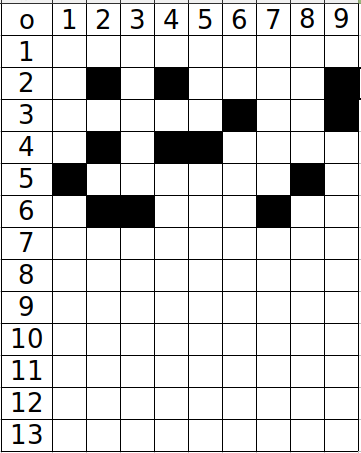 Here is a rune magic system that allows you to group spells that gradually unlock to magic-users. The system does require a check to successfully cast, but many optional rules are provided to enhance the magic-user’s chance or make the risk worthwhile.

Carl Sandburg mentioned iron thoughts in one of his poems. Mine come when the insomnia  wears out the part of me that second guesses my ideas.

About ten days ago, I flushed out an idea for a general purpose RPG that used two regular six-sided die and a standard deck of cards. For those that do not have tsu.co accounts, I repeated it again on Google Plus. The idea can be summarized as follows:

Spread ten points across three attributes, Brawn, Finesse, Acumen. If you are a Wizard, set your Magic stat as 1.

Draw a card from the deck and mark it on your character sheet. This is your chi or whatever you wish to call it.

For Magic, draw a card and add your magic stat to the rank of the card. Then consult the table below. The first item that applies is your result.

That was a week ago. Since then, I realized that I could add other special abilities with a fourth stat and a resource pool to manage it. The ideas started flowing.

Yesterday, Eric Nieudan happens upon this post and decides to build his own dungeon generator with 2d6 plus a deck of cards.

I read over it and instantly love it. So, I did what any self-respecting geek would do, I made a spreadsheet of it for testing. After testing it, I offered some suggestions that tested out well. I'll post a link to the corrected system when it comes available.

The iron thought that will not escape me is that I need to finish this game somehow. In addition to the Wizard character that uses magic, I have a psionic character, a priest character, a thief character, a martial character, and a few more. With Jens D and Eric Nieudan to start the idea, I have something for the referee's section of the game.

This needs to be made and I can't sleep for thinking about it.

Maybe supers would work on this system...

More to come on this and other game stuff in progress.